I've yet to watch the full run of Syfy's Battlestar Galactica spin-off -- Caprica -- largely because it took me so long to "get into" it's original series.  Plus Caprica kinda/sorta seemed to me in all of its associated advertising like it was going to be a prequel/sequel series skewed toward a much younger demographic than I fit.  (Say '90210 In Space'?)  However, I'm glad that one of its stars -- the young and lovely Alessandra Torresani -- so proudly embraced fandom as its next "sci-fi-babe."  Google the web for pictures, and I think you'll see what I mean.  Torresani was born on this day in 1987.

He's one of a very few actors who were given the chance to play the ominous Dark Lord of the Sith, Darth Vader, in Star Wars' Original Trilogy.  Sebastian Shaw only had a few moments with which to capture Vader (seen briefly sans helmet in Star Wars: Episode VI - Return of the Jedi), but, broken and battered, he embodied the fallen Jedi with a passing nobility.  Though he's no longer with us, Shaw was born on this day in 1905.

Funnyman Clifton James built a career out of playing mildly buffoonish characters to an audience's delight.  Mostly, I remember him as the small town sheriff who unfortunately went up against three Kryptonian villains when they arrived on Earth in Superman II (1980).  Though he's no longer with us, James was born on this day in 1920.

The talented Kevin Conway helped bring a kinda/sorta reincarnated version of the Klingon elder 'Kahless' to life aboard Star Trek: The Next Generation.  Conway was born on this day in 1942.  [Source: Memory Alpha]

The beautiful Julie Cobb turned up as an equally beautiful RedShirt in "By Any Other Name," a second season episode of the legendary Star Trek.  Cobb was born on this day in 1947.  [Source: Memory Alpha]

Composer Danny Elfman continues to leave his mark on film history by penning scores for some of the most fascinating visions brought to life in celluloid.  Elfman was born on this day in 1953.
​

Though he's no doubt best remembered as playing serial killer Buffalo Bill in 1991's The Silence of the Lambs, Ted Levine also helped try to save the Earth from an alien menace in 2001's tepid Evolution.  Levine was born on this day in 1957.

Aside from carrying the Highlander franchise throughout its several television seasons, the talented Adrian Paul continues to rack up points in genre entertainment.  He's been a part of such projects as Beauty and the Beast, War of the Worlds (TV series), Phantom 2040 (animated), Relic Hunter, Eyeborgs (2009), Cold Fusion (2011), War of the Worlds: Goliath (animated), AE: Apocalypse Earth (2013), and Stormageddon (2015).  Paul was born on this day in 1959.

Critical darling Annette Benning turned in a wonderfully comic turn as the disillusioned Vegas starlet trying to 'find herself' via New Age mysticism in Tim Burton's demented Mars Attacks!  Benning was born on this day in 1958.

Appearing as sumptuous as a Bond girl, Melissa Young had a small role aboard "Our Man Bashir," an episode of Star Trek: Deep Space Nine's fourth season.  Young was born on this day in 1967.  [Source: Memory Alpha]

Hunky Steve Cardenas brought his hunky goodness to several TV incarnations of the popular Power Rangers franchise.  Cardenas was born on this day in 1974.

Colombian-born Zulay Henao entered the realm of Science Fiction and Fantasy with a role aboard S. Darko (2009) for 20th Century Fox.  Henao was born on this day in 1979.  [Source: IMDB.com]

As much as I loved Peter Jackson's interpretation of The Lord of the Rings, I absolutely hated so very much of his attempt at bringing The Hobbit to life.  Still, that's no fault of the players, of which the very talented Adam Brown boarded the project as the Dwarf named 'Ori.'  Brown was born on this day in 1980.

Chris Violette warped into Trek's ever-expanding universe with a guest role aboard CBS's controversial Star Trek: Discovery for its streaming portal.  Violette was born on this day in 1981.  [Source: Memory Alpha]

After enduring "The Christmas Invasion" as part of Doctor Who's 2005 season, dreamy Anita Briem took the Journey to the Center of the Earth alongside funnyman Brendan Fraser in 2008.  Briem was born on this day in 1982.

Lovely Pearl Mackie dipped herself into the realm of Science Fiction and Fantasy when she signed aboard the BBC's long-running Doctor Who in its tenth season.  Mackie was born on this day in 1987.
​

Shara Connolly has given Fantasy a whirl with work aboard such properties as The Shannara Chronicles and Power Rangers Dino Charge.  Connolly was born on this day in 1988.  [Source: IMDB.com]

As part of the Spanish-language Science Fiction show El Ministerio del Tiempo ("The Ministry of Time"), the lovely Aura Garrido plays only one of the specialists trying to put history back on its proper path.  Garrido was born on this day in 1989.

Lovely Riley Keough plays one of the lovelies in dire straits as part of this summer's Mad Max: Fury Road.  Keough was born on this day in 1989.
​

Chalk up another one for "I know that voice, but I don't know the face": the fetching Erica Lindbeck has provided vocals to a variety of projects which should delight genre fans, including characters aboard Avengers Assemble, Transformers: Robots In Disguise, and DC Super Hero Girls.  Lindbeck was born on this day in 1992.  [Source: IMDB.com]

With roles aboard such fantastical journeys as The Sarah Jane Adventures and Avalon High (2010), Gregg Sulkin has always been near and dear to genre entertainment.  Sulkin was born on this day in 1992.
​

Science Fiction can be a tough gig, especially when you're saddled with a bit of casting controversy and a (sadly) lukewarm script essentially retreading a box office original.  That said, Maika Monroe did the best she could stepping in to the role of Patricia Whitmore (a role created in the first flick by someone else) to elevate Independence Day: Resurgence's drivel ... it just didn't help much.  Monroe was born on this day in 1993.
​

One of newcomer Paloma Kwiatkowski's first screen roles was as 'Thalia' aboard Percy Jackson: Sea of Monsters (2013) for Fox 2000 Pictures.  Kwiatkowski was born on this day in 1994.

On this day in 1987 (in Sweden), The Kindred kicked up some floorboards and stirred up what box office it could.  The SciFi/Horror feature starred Amanda Pays and Rod Steiger, and here's the premise as listed on IMDB.com:

"A geneticist takes his assistants to his old family home to locate the deadly product of his late mother's revolutionary research into rapid human evolution - his monstrous tentacled baby brother - before a mad scientist gets to him first."

On this day in 2009, the SciFi/ShortFilm 2081 enjoyed its audience at the Seattle International Film Festival.  The flick starred James Cosmo and Julie Hagerty, and here's the plot summary from IMDB.com:

"A short film adaptation of Kurt Vonnegut's Harrison Bergeron, 2081 depicts a dystopian future in which, thanks to the 212th Amendment to the Constitution and the unceasing vigilance of the United States Handicapper General, everyone is "finally equal...." The strong wear weights, the beautiful wear masks and the intelligent wear earpieces that fire off loud noises to keep them from taking unfair advantage of their brains. It is a poetic tale of triumph and tragedy about a broken family, a brutal government, and an act of defiance that changes everything."

I smell a knock-off!  On this day in 2015 (in Germany), Jurassic City roared into existence.  The feature starred some CGI dinosaurs, Ray Wise, and Kevin Gage, and here's the plot summary from IMDB.com:

"Prehistoric animals emerge from a science lab and tear up most of Los Angeles."

On this day in 1953, Tales Of Tomorrow aired "Lazarus Walks."  This served as the forty-first episode in the program's second (and final) season, and here's the plot summary as provided by IMDB.com:

"After being resuscitated following his death, a man discovers that he is a walking lie detector."

On this day in 1964, The Twilight Zone aired "The Fear."  This episode served as the thirty-fifth episode to the program's fifth season, and here's the plot summary as provided by our friends at IMDB.com:

"Charlotte Scott and policeman Robert Franklin seem to be stalked by giants."
​

On this day in 1965, Doctor Who aired "The Chase: The Death of Time."  This served as thirty-first episode of the program's second season, and here's the plot summary as provided by the Doctor Who Online Guide:

"The Doctor and his friends have been given shelter from the Daleks by the Aridians. But the Daleks threaten to kill the Aridians unless they hand over the time travellers." 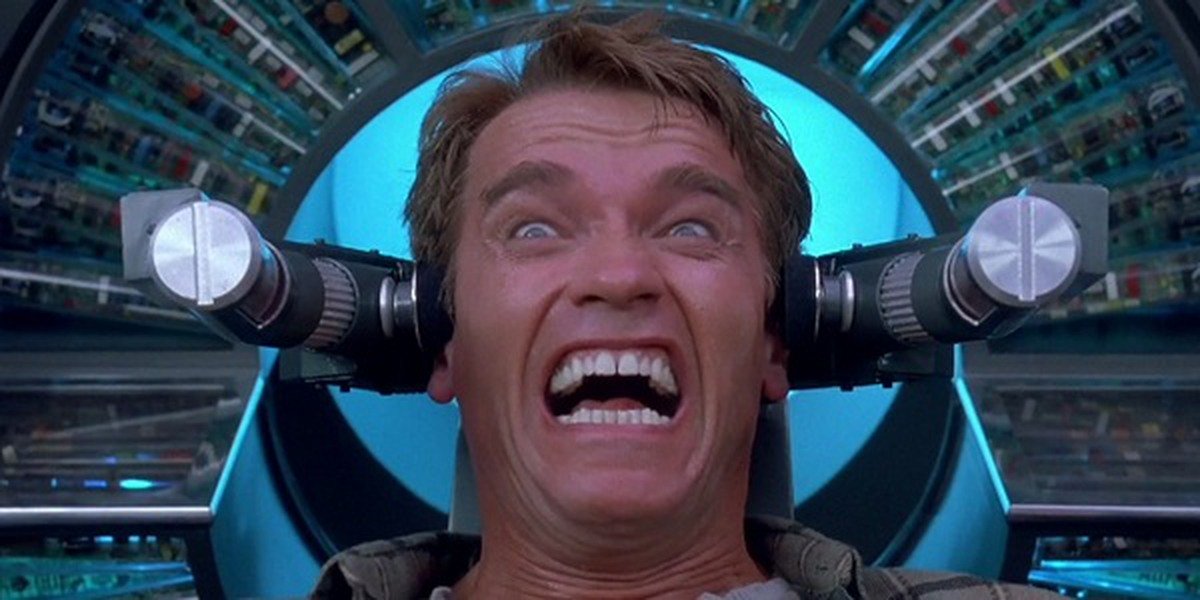 On this day in 1971, Doctor Who aired "The Dæmons: Episode Two."  This served as the twenty-second episode of the program's eighth season, and here's the plot summary as provided by IMDB.com:

"With the Doctor frozen by the energy release from the barrow, Jo calls Yates and Benton for help, but when the Brigadier tries to join them he finds the village surrounded by a heat barrier."

It all came down to this: on this day in 2001, the SciFi/Action series Seven Days came to an end with the airing of "Live From Death Row."  This served as the twenty-second episode of the show's third (and final) season, and here's the plot summary from IMDB.com:

"When a General is killed in an air show accident, Parker Backsteps, but instead uses it to save a wrongfully convicted friend on Death Row."

On this day in 2010, Doctor Who aired "Cold Blood."  This served as the ninth episode of the (relaunched) program's fifth season, and here's the plot summary as provided by IMDB.com:

"The Doctor and Nasreen Chaudry go deep underground and find an ancient society that has been disturbed by the drilling. They are gassed and taken prisoner just as Amy manages to free herself. The military commander of the underground reptilians, Restac, is convinced that the "apes' - their term for humans - are an invading force. Calmer heads prevail and the Doctor manages to negotiate a truce pending the transfer of prisoners which he, and some of the more pacifist members of the reptilians, hopes will lead to a lasting peace. The only problem is that Alaya, the reptile prisoner has been killed and Restac is ready to go to war."

On this day in 2015, Star Trek Continues released "The White Iris" to audiences online.  This served as the fourth episode of its first season, and here's the plot summary from IMDB.com:

"Captain Kirk finds himself haunted by guilt from his past as the fate of an alien world hangs in the balance."